I was playing with the thought of building some Arduino Based Guitar Effects Pedals. With that in mind, I have added some simple sound effects to my Arduino Audio Tools Library and this is fitting quite nicely into the overall design.

The audio effects are applied to an input signal: Here in order to test the functionality, I just use a SineWaveGenerator that is assigned to the AudioEffects. Since the AudioEffects is a SoundGenerator, we can use the GeneratedSoundStream class to turn it into an Input Stream source.

Next we need to define the effects that we want to use. Each effect has parameters:

After having the input parameters defined we can create and assign the individual subclasses of AudioEffect:

The effects are processed sequentially in the defined sequence. You you don’t want any specific effects you can leave them out or set them as not active.

In the final sketch, the generated sine wave will be replaced with the input from a ADC. But I leave this to a future Blog.

I think with the current design is is quite easy to add additional Effect implementations. You just need to create a subclass of AudioEffect and implement the process() method which receives an input value and provides the resulting output value.

You can find a full example on Github, that sends the output to a Webbrowser. 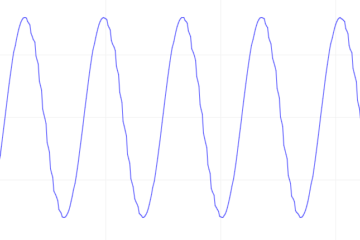